It was 15th August last I saw, by chance, an article in a Welsh newspaper in which a group of three are pictured holding a flag – to honour Rhys ap Thomas for his treachery in killing Richard III at Bosworth Field.  I believe I am a cat of some perception, but I was somewhat amazed at the bizarre suggestion in this article that by this deed, Rhys ap Thomas also struck a blow for the promotion of the Welsh language.

It would seem that Richard III did nothing for the Welsh – except. of course, he gave a Charter to our town of Llandovery – later ratified by our present Prince of Wales – and he also gave Rhys ap Thomas considerable lands and an income for life – and in exchange Rhys ap Thomas swore allegience to Richard III – his oath as follows:  Whoever ill-affected to the state, shall dare to land in those parts of Wales where I have ‘anie’ employment under your Majesty, must resolve with himself to make his entrance and irruption over my belly’.

So, what happened that he turned traitor?  Henry Tudor and his army of French conscripts began an advance into Wales – Rhys ap Thomas, seeing he was outnumbered decided to change sides – to turncoat!  But, what about his solemn oath?  Well, at this point it would appear the matter descends almost into farce.  It was suggested by a churchman that maybe if Rhys ap Thomas just lay down in the road and let Henry Tudor ‘step over him’ that would exonerate him from his oath.  This, apparently did not please Rhys ap Thomas – well, there was a lot of rain around at the time – and it was decided, instead, that Rhys ap Thomas would shelter under a bridge, and allow Tudor to march over him, thereby – sort of – exonerating him from his oath!  Wow!

Also, you see, Richard III is criticised as he did not support the Welsh language – though neither did Henry VII, Henry VIII, Mary Tudor or Elizabeth lst.  It is certainly true that Elizabeth’s Act of 1563 stated that a Welsh bible should be printed – ‘by conferring bothe tongues together, the sooner to attayne to the knowledge of the English tongue’ but the Government in allowing its use side by side with the English bible …intended to hasten the extinction of the Welsh language.  (See Aber-Cook – Pages from the History of Llandovery).

As Rhys ap Thomas died in 1525 – he can’t actually have had much say in the promotion and publication of the Welsh bible in 1563.   What is true, however, there appear to be no lengths to which some will go to vilify Richard 111 and with him the English language.

Below this newspaper article is another.  This time quoting the words of an ‘international rugby referee’ – the article chastises parents who do not wish their children attending primary school to be taught solely in Welsh – words like ‘respect our way of life’ – are hurled at the unsuspecting heads of parents because of their views and wishes – in a most disrespectful way.

I am an old cat, and I certainly won’t be around in 2050 to count if the one million Welsh speakers that Plaed demand actually exist and quite honestly, I have such good, kind neighbours who always speak to me in the language we both understand – English! My suggestion is that those who want to promote the Welsh language should take a step back and begin to listen to their wider community. Their dreams may not be the same as yours, but they have every right to a choice – to be treated with fair play and given a level playing field – something all rugby players and their referees would demand. 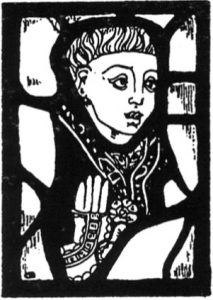 On a happy note: the image shown here is of a stained glass panel by the artist Caroley Bergman.  She also designed and re-produced the Richardian flags that were used at the Battle of Bosworth for Simon Barnes’ play TRIPLE DICK.  The play was produced and performed at Llandovery Theatre as part of the celebrations for the re-instatement of the Royal Charter by the Prince of Wales, in 1985.

Thank you for reading my words – You will realize, by now, that I am a Richardian – and, on reflection, possibly the first Theatre Cat to be so!