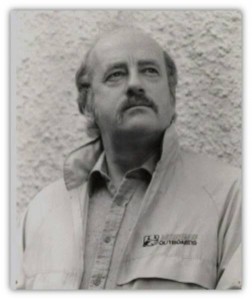 The Llandovery Theatre Company Trustees sorrowfully announce the death of their director and founder Simon Barnes.

Simon Barnes, actor and director of the Llandovery Theatre Company, trained with the Actors Workshop in London, and began his career in theatre in 1962, when Robert Digby – director and manager of the Colchester Repertory Theatre offered him a job as ASM, £7 a week.  He maintained that this work was the most wonderful and carefree time of his life, and he was soon promoted to stage manager (with no rise of salary). It was also Colchester Theatre where he met and fell in love with his actress wife Jaqueline Harrison.

By 1973, having worked in a number of reps, and on TV, this time as an actor, his interests turned to writing for the theatre and television, and he produced and performed his own childrens series for Greenwich Cablevision, naming it ‘Free For All’; won a BBC Radio drama competition, and wrote a number of plays and scripts.

In order to concentrate on writing, the Barnes left London and moved to Wales, where they bought a small – derelict – cottage in Llandovery, and without any previous building skills, began to restore it into the haven – Croesffordd.

By 1975, interested in putting on their plays, the Barnes looked around for a possible venue, and found the Old Institute, once a chapel and later the British School, now derelict, and here began – what was to become their way of life, the building of Llandovery Theatre, and producing the Llandovery Theatre Festival of new plays.

The Barnes formed a charity, the Llandovery Theatre Committee, each member (five of them) put down £5, and so began the renovation work. Simon was in charge of the physical building work, alongside the Job Creation teams and all other work teams that came in to develop the theatre, over the next 20 years.

There was to be no funding support from any Arts Council, local authority, or lottery towards the building of the Theatre, indeed, at one time,  the Barnes had the deeds of their home held by the bank as they struggled to raise funds to complete the work on the theatre building.

The opening two Festivals (1976 & 77) were triumphant, with press releases calling his play Who’ll Feed the Horses – ‘a hoot from start to finish’, and describing the Festival as: ‘The most exciting event since 1485’ (date a royal Charter was awarded to Llandovery by Richard 111) – the future for professional theatre in Llandovery looked good.

In 1978 the theatre, stage and auditorium, was ready, and the Festival  opened it with two of Simon’s  plays: ‘Where Julie Gone’, and ‘Come in God My Time is Up’ – the latter bringing forth a number of ‘critical’ letters concerning the use of the word ‘god’ on the poster alongside the word ‘comedy’.

In 1980, Llandovery Theatre  became the first Theatre in Wales to receive an EEC grant, but to obtain the necessary matched funding was to prove a fruitless struggle.  Still the Welsh Arts Council, West Wales Arts, and all local authorities refused to support either the building or the professional work of the company.

Then a small miracle, when a government man walked into the theatre one day and offered to fund, under the Manpower Services work programme, a small company of actors.  For two years 82 – 84, repertory theatre thrived again, producing and performing classic and modern plays, geared to the schools syllabus. By 1984, 10 actors and nine staff were employed at the theatre, under his direction.  But again, pleas to the Wales Arts Council to allow this work to continue failed.

In order to keep the Llandovery Theatre alive and buoyant, and with no hope of funding, the Barnes wrote and produced more and more plays, writing to constraints of very small casts;  training and directing children and community actors; producing pantomimes, plays and music halls.

In the early 90’s, workshops in drama for adults with severe learning difficulties were started,  then youth drama and literacy workshops.  Simon was passionate that all children should have every opportunity to express and develop their personalities, and that theatre was this route – and he had the most wonderful skills in supporting and developing talent in  the young and the not so young actor, to produce wonderful work.

In the 30 years he ran the Theatre, he wrote and produced over 20 plays. Everything he directed was a joy, and many of the young actors that he trained,  went on into the professional theatre, drama teaching, writing or direction.

His plays and satires explored the surburban bigotry in ‘Where Julie Gone’, the lies of politics in ‘Playground’, ‘Land of Cockaigne’, and ‘The Offer’, the sausage making machine of the education system in ‘Shoot the Sun’. He delved into behind the scenes royalty comedy in ‘Who’ll Feed the Horses’ and ‘One’s Too Free’ – rewrote history with a sensitive Richard 111 in ‘Triple Dick’,  and was at times so prophetic that, following a visit to the USSR in 1984,  he wrote  ‘Little Kingdoms’, and actually set the start of the collapse of communism, in Tbilisi Georgia.

In Llandovery, he played an extensive range of parts, among them:  the Master of Ceremonies in Victorian Music Halls,  a  philosopher tramp  in his own play: ‘Slow Bumper Car’, a one man Charles Dickens, Toby Belch,  Dame in pantomimes, and a heartbreaking performance as an old actor in his wife’s play: ‘The Little Bit the Boys Admire’.  He wrote a series of ‘radio’ plays, performed on stage at the theatre, with the actors in dinner jackets, in the style of early radio:   ‘The Poisoned Boot’.  In this comedy series his performance  – as C.P. the eccentric actor manager, trying to keep his ailing, poverty stricken theatre alive and kicking –  reflected much of what had been going on in Llandovery Theatre over the past 30 years.

And he created wonderful sculptures and paintings.  One of his last pieces of ivy sculpture being ‘The Angel of Mons’, set against the background of his ‘Peace – A mural of Clowns’ which he painted for the Marie Griffiths Gallery at the Theatre.

In 2003 he had cancer, and following surgery, appeared to make a full recovery,  returning to work on directing the youth film of The Taming of the Shrew and the children’s drama workshops – then in late 2005 he was again unwell, but only diagnosed with secondary cancers on October 5th, 2006,  and given 3 – 6 months to live.  He didn’t however, have that time – he died October 28th, at Croesffordd, the home he built and called Paradise.  He was 67.  His wife Jacky was with him.

The Llandovery Theatre Company will recommence work with their youth and community groups in the New Year, and complete the editing of the children’s film of The Taming of the Shrew.

Enquiries regarding drama projects and future productions can be left on our web message page, or addressed to: