Dear Friends,
As the song goes – June is busting out all over…

This month of June, our team at Llandovery Theatre – our Trustees, Actors, Artists, Writers and Friends will be meeting to discuss and mull over plans for the coming year.

History
It was an evening of 1975 – Simon and Jacky Barnes were sitting in the kitchen in their house when there was a bang on the front door.  A very loud bang!  Opening it, they discovered four young men!  Was this a delegation from the Welsh free army, they wondered?!

The four lads entered the small kitchen – ‘Heard you are actors’ one said – ‘we’ve come to ask if you would consider directing us – the Llandovery Young Farmers –  in the All Wales YFC drama competition?’  (So not the Welsh free army!)

The play chosen that night was OH WHAT A LOVELY WAR, the brilliant anti-war script from Joan Littlewood’s Theatre in Stratford East, London – Theatre Workshop – later made into a film, directed by Richard Attenborough.  For the Llandovery Theatre Company it was the start of work with community and youth drama projects that would last over 40 years!

Llandovery Theatre Company
We are here to support and develop your performance dreams.  We work in a building, recently described in a Review on Amazon of What Country Friends is This? as ‘possibly the most beautiful small Theatre and Arts Centre in the kingdom’.  Yes, it is beautiful – it is your Theatre, it is a Theatre for everyone!

Follow us on the Llandovery Theatre Face Book, or Theatre Web Page, and contact us to let us know your ‘dreams’.

Read all about us!

What Country Friends is this? is the Theatrical Memoir of Simon and Jacky Barnes, and the building of the Llandovery Theatre. It is available via Amazon, in paperback and ebook.

Find out about us!  It is a good read for a summer afternoon!

P.S.  This picture is of me sitting in a deckchair being photographed – somewhat against my will.  I was a very inexperienced young cat in those days, and not yet used to ‘theatricals’. 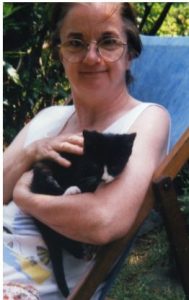